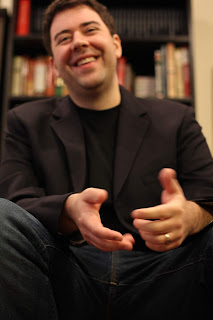 Mark R. Brand is an award-winning Chicago-based author and writing instructor. He holds an M.A. in Writing & Publishing from DePaul University and a Ph.D. in English from the University of Wisconsin-Milwaukee. He has taught in the English departments of Wilbur Wright College (City Colleges of Chicago), Northeastern Illinois University, and in the Global Studies department at the University of Wisconsin-Milwaukee. He is the founder of ALOUD!, DePaul's quarterly reading series for creative writers, and served in 2012 as Coordinator for Writing Groups for the University Center for Writing-based Learning, for which he was recognized by the University for Excellence in Service of Adult Learners. While he completed his Ph.D. he served as project assistant to the Vice Provost in UW-M's Center for International Education. For the 2018-2019 school year, he served as Assistant Director of the Carsey-Wolf Center at the University of California, Santa Barbara, one of the largest critical film and media studies departments in the U.S. He currently teaches English for the University of Illinois at Chicago and Wilbur Wright College.

He specializes in teaching research writing, first-year writing, and writing intensive courses concerned with digital literacy. His course topics have included alternative economies, relationships and technology, nostalgia narratives, catastrophe fiction by female science fiction writers, the anxieties of capitalism in zombie narrative, globalization and technology, and virtual reality, augmented reality, and atmospheric media. He is a two-time winner of the Digital Literacy Teaching Award from the City Colleges of Chicago (2017/2018) for his development of first-year writing courses that utilized video games as texts and open-source digital tools for project-based research writing.

His novels include: The Damnation of Memory (2011), Life After Sleep (2011), and Red Ivy Afternoon (2006, Bronze medal in Fantasy/Science-fiction, Independent Publisher Book Awards). His fiction collections include: Long Live Us (2013), and Thank You, Death Robot (2009, Silver Medal in Fantasy/Science Fiction, Independent Publisher Book Awards). His short fiction has been featured in several collected volumes including Daddy Cool (2013), American Wasteland (2011), and he was awarded the Sheila Roberts Prize for Short Fiction in 2017 for his short story "With Darlin' in the Bootheel." He has served as editor and prepared manuscripts for numerous fiction and non-fiction books, including volumes published by Switchgrass Books (Northern Illinois University Press) and Rutgers University Press, as well as serving as short-fiction editor for Silverthought Press from 2008-2011 and associate editor for Cream City Review from 2013-2017. His personal essays have appeared in Salon.com and his academic article "Growing Old in Utopia: From Age to Otherness in American Literary Utopias" was published in Age, Culture, Humanities: An Interdisciplinary Journal in 2016. He regularly presents his scholarly work at conferences and colloquia (most recently at conferences of the Society for Utopian Studies, the Science Fiction Research Association, the Pacific Ancient and Modern Language Association, and the Popular Culture/American Culture Association) and he is currently working on a new collection of short fiction titled Run Forever, and a nonfiction monograph that examines narratives of parenting in the Great Recession.