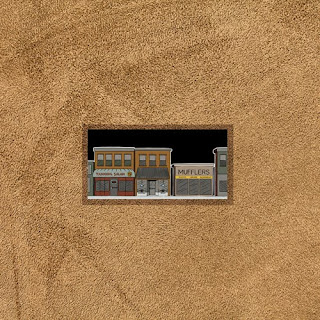 I'm very pleased to be able to host a stop on the recent blog tour for Ben Tanzer's new book The New York Stories, which was illustrated by another Chicagoan, artist Laura Szumowski. Now you all know about my enduring man-crush on that handsome devil Tanzer, but what about those cool illustrations? I took a few minutes recently to chat with Laura via email about the sorts of things that drive her work.

Mark R. Brand: So let’s just dig right in and talk influences, shall we? If for no other reason than that it will allow me to put all of my fanboy-ishness right out there right up front. I was drawn to your work immediately when Jason showed me some of the proofs of the images before the publication of The New York Stories, and in no small part because I saw in it (or thought I saw in it, I’m more of what you’d call a “not-artist”) the influence of people like Jean Giraud, Marjane Satrapi, Matt Groening, and maybe even a little Ralph Bakshi? I know enough about comics to know that saying you’ve been influenced by Jean Giraud is like saying a musician was influenced by Leo Fender because he or she plays an electric guitar, but there’s a distinctive cleanliness that your work for The New York Stories wears, that brings to mind the vivid primary colors of rotoscoping wrapped around two-dimensional human contours until a printmaking-ish effect is reached. It’s flat and linear until it isn’t, in other words, and it tickles my sense of perspective a bit and reminds me I’m looking at something restrained by the flatness of the medium. Here’s the point where you show the rest of the world exactly how clueless I am and rattle off a dozen influences that I’ve never heard of but will be my favorite new things ever once I write them down and immediately seek them out. Go!

Laura Szumowski: My very first influence, who remains one of my favorite comics artists, is Joe Sacco. I read Safe Area Gorazde in 2004, and it exposed me to a whole new world of possibilities with art, storytelling, and non-fiction approaches to comics. I went on to work as an assistant to Paul Hornschemeier, another big influence who shared his philosophy and opinions on coloring with me. Working with Paul also provided a frame of reference for self-publishing and being a working artist: printing and producing books, filling orders, balancing work with life, being a hermit, etc. Beyond that, I've had a mixture of influences and favorites; Daniel Clowes, Kate Beaton, Marjane Satrapi, Frank Miller, Alan Moore, Linda Medley, Jeffrey Brown. To be honest, I don't read as many comics as I probably should.

Apart from comics influences, my work has been shaped a great deal by a variety of health books. As a child, I loved Peter Mayle's series of children's books about the body, including "Where Did I Come From?" and "What's Happening to Me?" In college, I read The Technology of Orgasm by Rachel P. Maines and A New View of a Woman's Body by the Federation of Feminist Women's Health Centers, both of which inspired me to create a series of women's health guidebooks. I'm also a big fan of Raleigh Briggs' Make Your Place, an awesome illustrated guide to sustainable living.

MRB: Ah, see, I was just about to say Frank Miller and Alan Moore, too, but I figured if I did I'd look like the guy that just pulled out the two biggest names he could think of in graphic novels. Because in case our readers don't know those two have their stylistic fingerprints on everything from comics to TV and feature film the way Jean Giraud, Frank Frazetta, and H.R. Geiger did in the 70's. Just to plug something completely unrelated here that I love, Alan Moore's collaborator on The Watchmen Dave Gibbons drew one of my all-time favorite graphic novels, a book called Rogue Trooper: War Machine. It's obscure and not readily available in most bookstores but if you can get your hands on a copy of it, it's pure sci-fi gold and thoroughly entertaining. And as promised, I'm taking notes here. These sound terrific. What other sorts of media turn you on stylistically? Got any favorite directors or musicians or photographers or other artists that speak to you in specific ways? 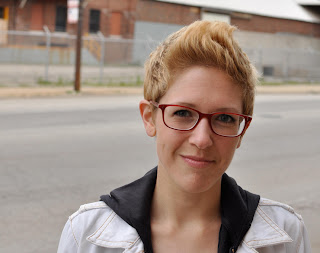 LS: The people who know me best would tell you about my fondness for Jurassic Park and Harry Potter, but those are my guilty pleasures. I'm a big fan of street art, artists like Blu, and everyone on the documentary Beautiful Losers-- but it could be any kind of street art, by anyone, old painted billboards or Our Lady of Guadalupe. Typography is another favorite, as well as tattoo art and old sideshow posters.

I don't really keep a list of favorites, it feels too limiting to me. I like seeing what my friends and peers are up to, but I also enjoy time away from art and media. The most recent thing to catch my fancy is the documentary The Rise of the Southern Biscuit.

MRB: Delving a little bit deeper into your catalog, in particular Cycling and Dork-Dance 5,000, I was equally pleased that when my impression of your style veered away from the art for The New York Stories, it veered straight into one of my other favorites: what I’ll call for lack of me having anything resembling an artistic vocabulary the “Life in Hell-like doodle-meets-whimsy-meets-ultra-smartass” genre. Plenty of block lettering and funny little widgets floating in smirking approximations of timelines and graphs and charts that remind us to pay attention because it’s fun, and not to take ourselves or everything we read quite so seriously. Tell me more about where this side of your work comes from.

LS: I definitely try to evoke a sense of fun and ease with my illustrations, particularly in the women's health series. The subject matter can range from intimate to unfamiliar to taboo, so I strive to frame that material in a way that makes it more approachable and friendly. While on one hand I take my work and the information very seriously, on the other I believe there can be a major benefit to keeping things simple and a bit playful. I am often reminded of The Magic School Bus series of books, which I loved as a kid. These books approach teaching in a different manner, a fun and relatable way that makes learning exciting and special.

MRB: I hear only good things about The Technology of Orgasm, and you're the second or third person to mention it to me in the last few months, so I guess I'm going to add that to my reading list. I love the fact that you're bringing some levity (and accessibility) to women's health texts. I've been in healthcare (musculoskeletal mostly, orthopedics and chiropractic) for many years, and when you're educating people about their health, no matter how good the information is, no matter how correct and concise, there's a little gap in understanding that the information has to jump over to make a difference in people's lives. If the best thing available is Ye Olde Stuffy Ponderous Doorstop of yesteryear with vague descriptions and unhelpful diagrams, then the gap widens. There's something to be said, too (and please don't take this as a backhanded compliment, because it's absolutely not), for the readability of a book that doesn't try to harness your ability to think abstractly. One of my favorite medical texts is an anatomy book called The Trail Guide to the Body. It's completely hand-drawn and comprised of cutaway pictures of muscles and bones in various body positions. Eating a hotdog, climbing a ladder, lying on a couch, etc. The book seems on the outside to be a simplistic, almost-too-cavalier answer to the fifteen-hundred page Gray's Anatomy of the Human Body (which, while exhaustive, isn't exactly easy or accessible for most readers). But year after year, and from clinic to clinic, the book I used to the best effect, copying pages from for my patients and using it to explain muscle position and function to people who might not even speak very strong English, has been this ingenious little mildly-whimsical hand-drawn book that looks like a cross between the illustrations from The Joy of Sex and an 80's cartoon coloring book. Somehow it just clicks with people and that gap gets crossed with the absolute minimum of squinting and head-scratching and saying things like "That's either a shoulder joint or the exhaust system of a Buick."

So it's clear to me that this project of writing these books, spanning I'm guessing several years, could be nothing other than a massive labor of love for you. I've written three books and edited a fourth and each of them has taken years off of my life in their own way. Dare I ask what's next? Is there some other project on the horizon that's calling to you when you've finished conquering this niche? I've heard your name pop up everywhere recently, in particular associated with some of the other independent presses and publishing organizations in Chicago that are lucky enough to get you to do some work for them. Care to say a few words about that?

I have a few different projects in the works. I'll be adding to the women's health series with a book about fertility awareness. I'm also excited to be working on my first graphic novel, stories from my dad's childhood growing up in Delray, a blue collar neighborhood in Detroit. I'll be doing other freelance illustration work along the way, and I'd love to do more projects like The New York Stories.

MRB: Thanks so much for taking the time to chat today, Laura, and best of luck with your work.

(You can learn more about Laura Szumowski and see her work on the web at http://lauraszumowski.com and http://www.zoo-mouse-key.com)